So I guess I should start with who I am. My member name is VanCleef and yes, it was inspired by the awesome actor from a series of great Spaghetti Westerns. A number of years back I started modding my Fallout 3 game and using pose, clothing, locations and about a zillion other mods, created a series of comics featuring my Fallout PC, Silas Caine, a cynical Wasteland Ranger who patrols the DC Wasteland hunting down criminals and dispensing justice. At some point I'll get around to posting them here if anyone is interested. I had a big following over at the Fallout Nexus and released a number of issues. While I personally think the writing and stories were pretty good, the graphics were total crap. I created the whole thing using (brace yourself!) Microsoft Paint! My computer burned up one day and I didn't get back to gaming or creating comics for several years.

Late last year I decided it was time to get going again and treated myself to a new computer. Once I got it up and running and re-installed my old save games I realized I'd missed creating comics. So I decided to start over again but this time do a better job! And while I hope to get back to producing Adventure Comics I decided to go in a new direction with this one. I want to do something sexy and funny.

I had an idea for a story about a girl who signs up to beta test an online massive multi-player online sex game set in the Fallout Universe. But when she does events go wildly awry. This story isn't going to be the next great American Novel. In fact, to label it Pulp Fiction might even be a stretch. But it'll feature lots of comedy, boobs, ass, kink and sex mixed in with the adventure. I hope you'll tune in when I get some pages up.

Fortunately for me the Master of Modding Mojo His Own Bad Self, Kendo 2 is giving me a hand.  Not only are his comics an inspiration but he has been enduring a veritable onslaught of questions and for some reason he's still putting up with me. He's been a huge help so far.

In any case I just spent the last few hours tonight navigating the murky waters of the GIMP illustrator program and I sort of managed a test cover. I still have a way to go before I'll consider it worthy of release but feel free to critique it. 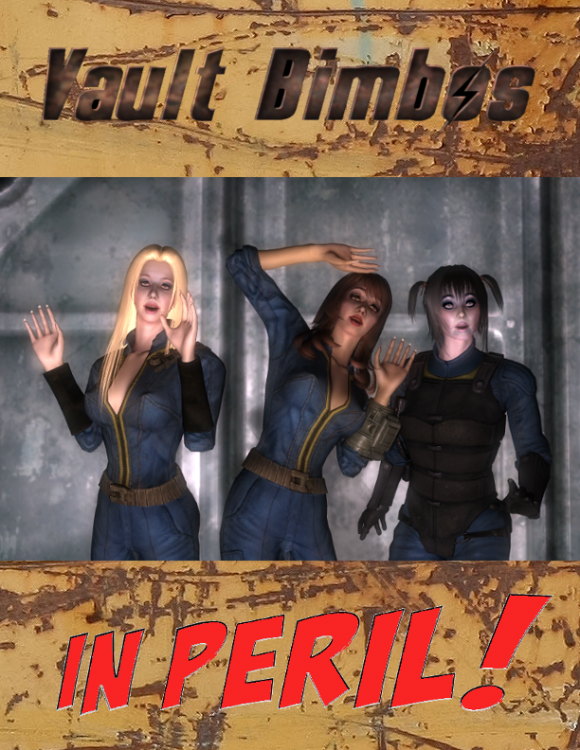 Alright. That's enough for now. Hopefully I've piqued your interest. Or not. Whichever.