WHAT DOES THIS DO?
This mod adds new playable races and allows you to customize them to your own liking.  Currently there are four ‘new’ races you can play; Cyrodilic Dunmer (Dark Elves), Dremora Mortals (a new race), Cyrodilic Altmer (High Elves), and Cyrodilic Bosmer (Wood Elves).
The mod is designed and set up to allow you to customize the textures and other features of the copy races.  The idea is to make the added races unique while still being a part of the game’s lore and world.  If you want to add muscular normal maps and wet or oily skin now you can do so without altering the game’s base records for the vanilla races.

WHY BOTHER?
I have something like this in my own game and I use it a lot, but the files are all over the place. Making this mod puts everything in order and offers a cohesive foundation that doesn’t affect the vanilla game. And I like being able to swap out body textures without affecting an entire vanilla race.  Feel free to move on if this doesn’t interest you.

MOD PREMISE
For the elves, you are still an elf, (Dark Elf, High Elf, or Wood Elf) but you were born outside of your homeland.  You’ve never seen Morrowind, Summerset Isle or Valenwood and you know nothing more than what you’ve read in guide books or been told by others.  I simply used ‘Cyrodilic’ for conveinience.  You could be from Blackmarsh, Hammerfell, R'lyeh, or Mars.  It doesn’t matter so roleplay it in your head if you have to.
For the Dremora Mortals they are a new race of my own creation with their own abilities and somewhat lore-friendly backstory.

After the Oblivion Crisis and Merhunes Dagon’s defeat the portals that dotted Tamriel began to close.  Not all of Dagon’s minions were able to return to their home planes and some were trapped in Mundus.  The less intelligent and most aggressive daedra were quickly hunted down and destroyed, but this wasn’t the case for all of them.
The Oblivion Crisis was never forgotten by those who suffered, but as time passed people wanted to believe the daedric invaders were destroyed.  Anxious to restore order and calm the populace, the local governments became reluctant to pursue or even investigate reported daedra sightings.  Reports were dismissed as superstitious nonsense, mages and conjurers practicing their arts, and misidentified known creatures.  In truth, more than a few Dremora managed to escape detection as they vanished into the wild hinterlands of the various provinces.  This is where the story of Dremora Mortals begins.
The surviving Dremora trapped in Tamriel lost connection to the Planes of Oblivion and their Daedric Princes.  Without the planar emanations that previously sustained them, these Dremora quickly began to lose supernatural power.  As time passed they grew weaker, eventually falling to the physical and magical levels of mortal men and mer.  These Dremora also developed free will and were no longer compelled to answer the call of their former daedric masters.  Likewise, Daedric summoning and banishing no longer affected them.  And in a cruel twist of fate these Dremora were no longer immortal.  Though practically ageless or very long-lived, they could be killed by mortal means.
As time passed these ‘Mortal Dremora’ became more and more like men and mer.  Though still physically different from other races, they began to show more diversity in appearance.  The mystical facial markings placed by their former masters began to fade, their demonic horns began to wither, and their imposing statures began to shrink.
By the time of the 4th Era Dremora Mortals are as divergent in appearance as the other races of Tamriel.  Depending on their circumstances they may appear as near full Dremora or bear little if any resemblance to their Daedric ancestors.  In some cases, Dremora Mortals are fertile and fecund and can breed with other mortal races,  though the resulting offspring are always Dremora Mortals.

No Powers or Lesser Powers.

MOD FEATURES
*Customizable copy races for Dark Elves, High Elves and Wood Elves, and the new Dremora race.
*10 new racial presets for each race.
*39 custom eye textures.
*More color variations for skin tones.
*New game-friendly female makeup tintmasks for more face detail.
*Twice the amount of female color options for eyeliner, lipstick, makeup, etc. than the base game.
*Unique file structures so you can customize the races to your liking.
*Scripting for the new races if you decide to be a vampire or werewolf.

SETTING UP THE MOD FOR YOUR GAME
By default the mod uses UNP compatible female textures, but that is not carved into stone.  The mod uses whatever body meshes you have installed so you can easily use the mod with other body mods or use different UNP textures to suit your own taste.  UNP is not required, but changing things around is your job.  But I will tell you how to do it...

This will make the mod use whatever female body textures you are already using:

Go to C:\Program Files (x86)\Steam\steamapps\common\Skyrim\Data\textures\actors\character\female and copy all of the files for femalebody_1, femalehands_1 and female head.  Be sure to copy ALL of the pertainant files, including the _msn, _s and _sk files.  There should be four files each for body, hands and head.
Paste those files into C:\Program Files (x86)\Steam\steamapps\common\Skyrim\Data\textures\K2\K2CustomRaces\female_base.  Then ‘copy and replace’ the existing files.

SCHLONG/MALE SUPPORT HAS BEEN ADDED!!!
The mod now supports SOS.  The image in the spoiler is a Dremora Mortal, but the schlongs work for all of the new races. 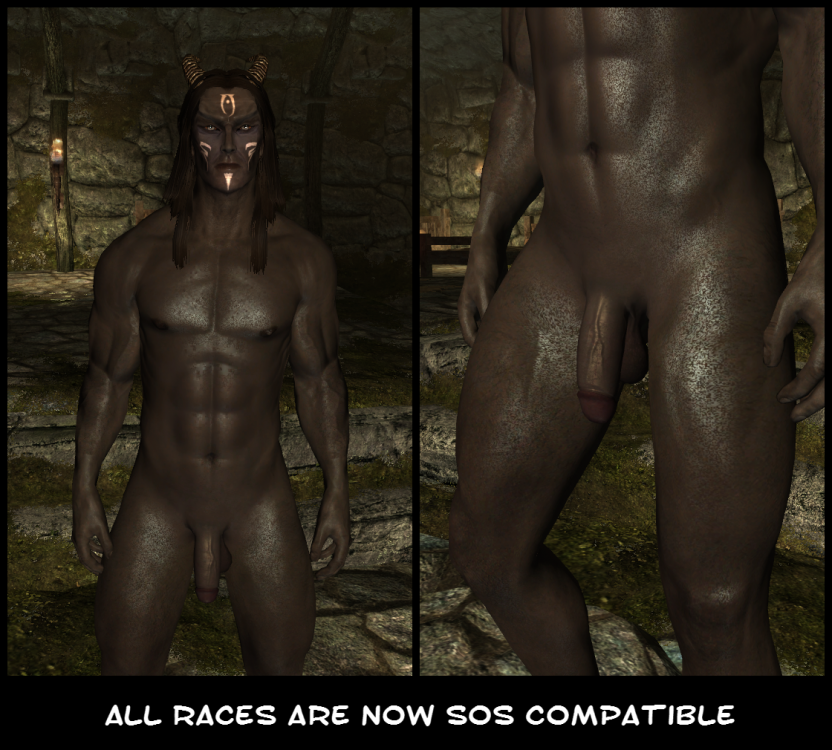 NO EXTENDED CHARACTER EDIT SUPPORT!!!
I do not like that mod and I do not use it.  I use RaceMenu.

ADD CUSTOM HAIR!!!
The mod only has vanilla Skyrim hairs available for the new races.  If you want to add your favorite customs hairs to the mod HERE is a tutorial from the Nexus Wiki on how to do it.  Just skip down to “Add the required head parts” and follow the instructions.  In the Valid Races window select K2CRHeadPartsElfRaces.

PERMISSIONS/TERMS
*This mod is not a resource and you must have my permission to use my content in your own mods.
*You may not upload my work to NexusMods.com, SteamWorkshop, Bethesda.net or any of their designees, Lover’s Lab, etc.  The mod is for NSFWmods.com only.
*As a downloader you have no vested interest in the contents of this upload.